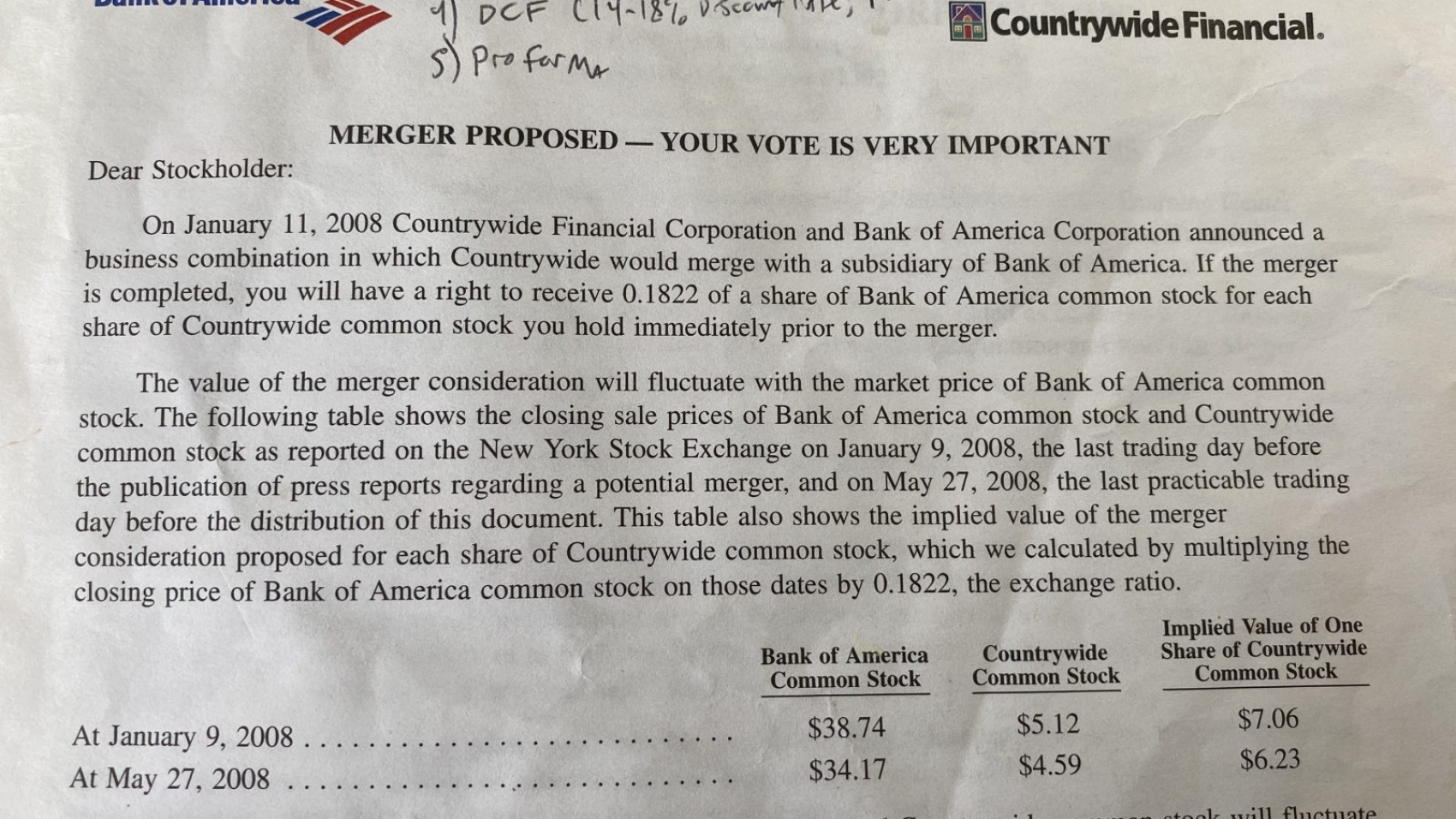 In 2006 Countrywide Financial financed 20% of mortgages in the US–loan volume equal to 3.5% of GDP. Two years later, early in the financial crisis of 2008-09, Bank of America swooped in and bought them 1 for over $4B in stock. Leading up to the deal close, they paid a few banks millions of dollars to advise them on the proposal.

What was Countrywide worth? Prior to such an acquisition, investment banks look at peer group market comparisons, recent transactions, and discounted cash flow models (highly sensitive to model inputs, especially in times of stress). I’ve kept the proposed merger document; the cover is the image header for this post 2. Such uncertainty called for a broad range of potential outcomes: “these analyses resulted in a range of implied present value per share of Countrywide common stock of $0.57 to $6.79.” That’s a variation of 12x under the 2009 stress-case modeling scenario. Imagine a house that appraises for somewhere between $300,000 and $3,600,000. Epilogue: BofA later found Countrywide hard to digest, suffering tens of billions in losses.

The unpredictability of COVID-19’s impact, on lives, health, economies, public policy, and on total medical claims is another area. Risk, with enough data, is often easy to model. Uncertainty is hard. A novel Coronavirus is new to humans and the models we have are imperfect, though some are useful. Modeling has never been about grasping exponential growth; it’s about the sensitivity of the assumptions. It doesn’t help that 4 of 5 statistically significant studies in epidemiology fail to replicate 3. Thankfully, the models 4 which have assumed social distancing, have revised deaths down.

On the impact to healthcare claims, some predict 7% in additional claims for 2020 (beyond the 3-5% in trend); others say 2-20% total net decreases for commercially insured and Medicare groups, depending on how long other care is deferred (elective procedures are opening up now but many specialties are down 30-70% vs. last year). There are estimates from Kaiser, FAIR health, Willis Towers Watson, Milliman, fed by models and analyses from CDC, Imperial College London, University of WA, Stanford, and many more, and still with lots of questions: Are asymptomatic cases included? How are they estimated? Do the models include assumed bottlenecks in care? What is Sweden doing? Why can’t we be more like Sweden or Germany? What’s the true R0? Is it like the flu for some and 20x the flu for others? A wider and more critical variation than the 12x Countrywide example–some medical claims models (dependent on infection rates, hospitalization rates and costs per stay, and assumed ICU use) range from $178 in extra claims per member per year, while the extreme cases show $6,500, a 36x difference.

Insurance companies are vague and side with a we-need-more-data approach. 2020 premiums are set but 2021 adds ambiguity. In an earnings call last week, UnitedHealth Group (UHC) said:  “Our view of the 2021 costs will continue to evolve as we learn more about the virus. [Premiums are] really priced after September. So, we’ll have time to get a better view on what the 2021 environment will look like.”

Markets, with support from Congress and some support and distortion from the Fed, are trying to decide what the impact is, trying to price risk. March condensed years of volatility in one month 5. This week May and June oil futures dropped below zero. As with the Countrywide deal, there are many potential outcomes. The future is risky but there are risks we all have to manage. With every airplane crash, the next plane ride is safer. I’m hopeful such is the case with the world’s reaction to viruses.