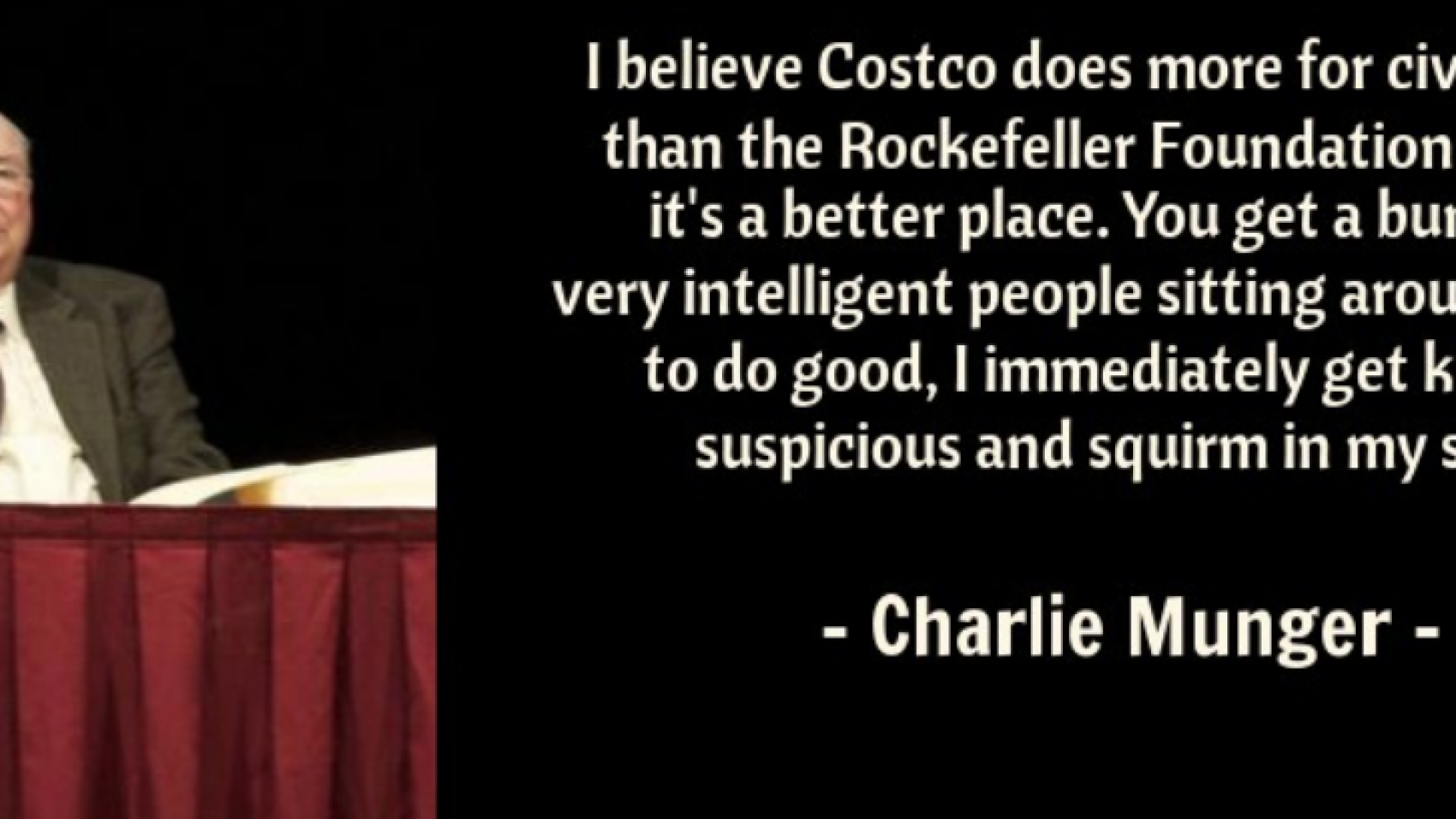 Some call them ‘clients,’ others,  ‘guests’ or ‘customers.’ Costco (Ticker: COST, revenue $141B) calls them ‘members,’ a term that makes you feel like you’re part of a special club. It’s a club that will not sell you junk1. They do not exaggerate. Theirs is not fake-Enron-style-ethics-virtue-signaling, and they actually list shareholders’ interests last. Focus on the whole business: customers, employees, suppliers, communities, and good things will flow (much like happiness). Returns to shareholders outpace the S&P. Costco sells a lot. They are the largest retailer of prime beef in the US. I’ve been a member since 2004 and as a family, we’ve spent boatloads on diapers and wipes for our three children. I can even return avocados that strangely don’t soften.

Costco is something the left and the right can cheer for. Workers earn at least $14.50/hr to start, $22.50 on average, and up to $55/hr for seasoned hourly warehouse employees, all with great benefits. In turn, they’re more productive, loyal, and more cheerful. Enough to make Bernie proud. And it’s all in a free market way. They also offer cheap prescriptions and optical exams. We bought our tires there, all while munching on samples of sausages, brie, and wontons. Perhaps the only criticism is that it induces some to buy too much. They do prime you by lining the entrance area with glitzy TVs and high priced cameras. The $8.00 for 12 jumbo muffins is then more palatable.  I’ll take that criticism.

There’s price obsession and there is Costco price obsession. 90% of every dollar saved goes back to customers. It’s a member-first experience and includes 90-day returns for electronics and no timeframe on anything else. After 20 years, hotdogs and sodas still cost $1.50, and rotisserie chickens $4.99.

Their membership fee is roughly equal to their earnings. That’s it. Costco marks up merchandise by around 11% on average, whereas most other competitors do so by 20-30%. They also only carry around 4,000 SKUs, compared to 120,000 for Walmart and millions for Amazon. There are usually only two kinds of jam, strawberry plus one other. How often do you buy French Apricot-peach preserves anyway? Bulkier items are hard to steal and having a $60-100 per year membership provides a great selection-bias toward higher income/spending households. Theft is 80% lower than Walmart (.2% vs. 1% of revenue). After wages, costs of goods, heating the stores, providing benefits, etc, what’s left is a sort of membership fee dividend. Jeff Bezos says “Your margin is my opportunity.” There is no margin to arbitrage. Net profit margins stand at 2%.

CFO Richard Galanti says “our DNA is we want to be the last to raise the price and we want to work with any supplier to figure out how to not do that.” That’s the opposite of what they teach in business school. “We invest in price as it’s in our DNA.” Most businesses end up falling for quick fixes or shortcuts. The short-termism and long-termism battle isn’t even something they’ll talk about.  If you’d like to read more, you can get a sample of Galanti from the October corporate earnings call with Q&A.

Costco also has one of my favorite investors and thinkers, Charlie Munger, at the youthful age of 92, as a member of its board of directors. “Generally speaking, I believe Costco does more for civilization than the Rockefeller Foundation.” High ethics and value across domains can do that.

In healthcare in the United States, it’s hard to imagine a Costco-like structure. Healthcare is transactional, people move, and it’s often tied with employment. I’ve had coverage with 4 different health insurance companies over the last 10 years and have no strong feelings towards anyone. A product I hope for: some form or sane Costco high deductible health insurance offering, or a direct care membership model (this movement is small but growing) with Costco value and customer obsession.